Another great week has come and gone, leaving us only three more weeks on Mackinac.  I just can’t believe we’ve been here over two months, but I can tell from all those “X’s” marked on the calendar that our days here are dwindling rapidly down.

No big story to tell today, so I’m just going to post photos I’ve been saving up this week.  With cooler weather arriving a few days ago, I’ve been throwing on jeans and long-sleeved tops – and occasionally another layer like a vest or sweater – and just going wherever a road takes me.  Fall is absolutely my favorite season on Mackinac!

Visitors to the island this week saw more motorized vehicles on the street than they’ve probably ever seen before, regardless of how many years they’ve been coming. Main Street is being repaved from the boardwalk to the water treatment plant beyond Mission Point.  This work really needs to be done, and completing the project before the snow flies meant starting just after Labor Day.  Vehicles are not something any of us want to see, but the work neeeds to be done, and the project will mean a much nicer Main Street next season! 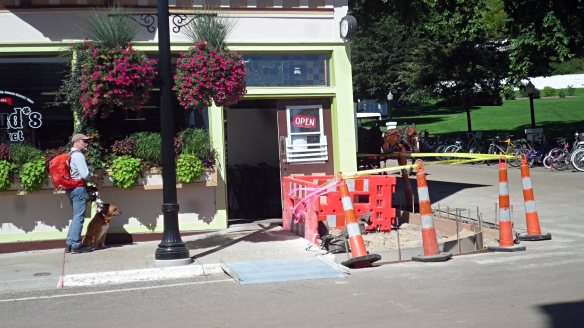 While the paving is going on, all the street corners are being converted to handicap-accessible.  That work is already completed (after this photo was taken), and the corners look awesome.  (This photo and one above by Jill Sawatzki.) 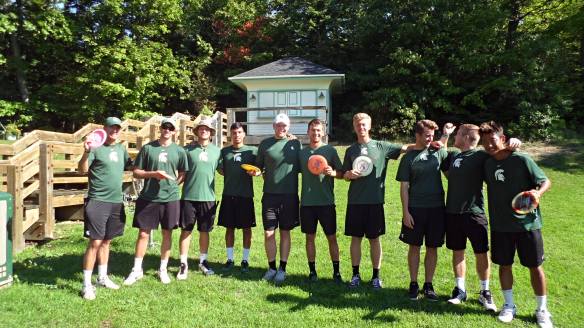 Jill also ran across the Michigan State Tennis Team one day up at Turtle Park.  They were enjoying a game of disc golf! 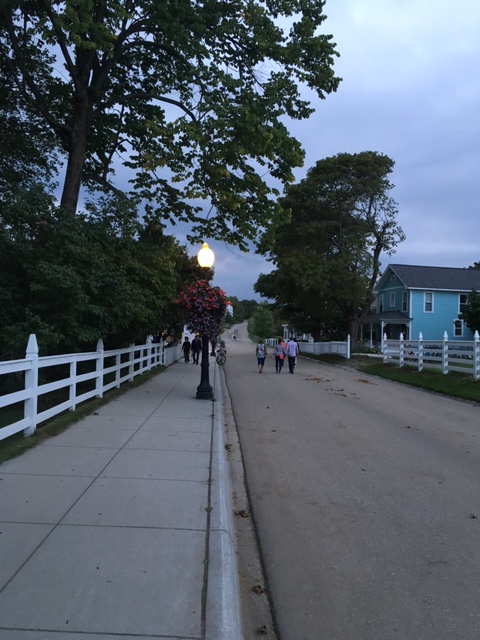 Walking to the condo at dusk – just after the streetlights came on.  Can you tell how quiet the island is becoming now that Labor Day has passed?  Still busy downtown during the day, but after the 6:00 ferries leave, you know Fall is upon us, and the huge crowds won’t return until next spring.

I have to introduce you to Susan and Keith Miller.  They arrived on Mackinac on Monday, the afternoon of the blog dinner.  They didn’t know if they’d get to the island in time to eat with us (their home is in Phoenix, Arizona), so they didn’t RSVP the invitation to dinner.  They DID arrive in time and were in the Chippewa lobby when that group photo was taken – but they didn’t want to interrupt since they hadn’t made a reservation.  Jill discovered all this and talked to them later in the bookstore. Susan has been a blog reader for many years, and I’m so sorry I missed meeting them!  Next year, Susan and Keith! 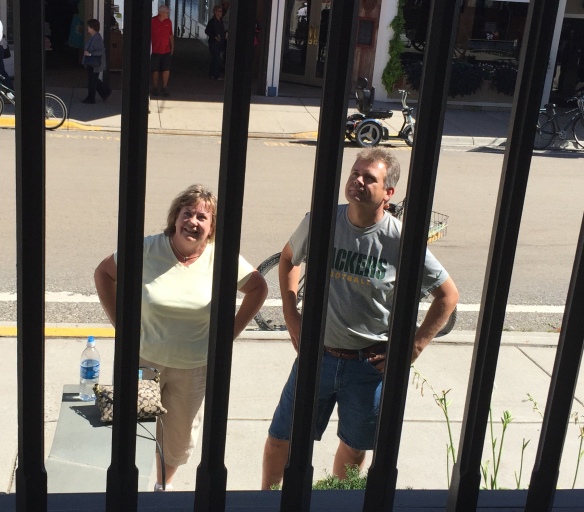 Yvonne and Tony stopped to talk to the Greens, Jill, the DaVanons, and me as we sat and rocked on the porch at the Lake View Hotel on Tuesday.  Later we  all walked down and saw them off on the ferry. 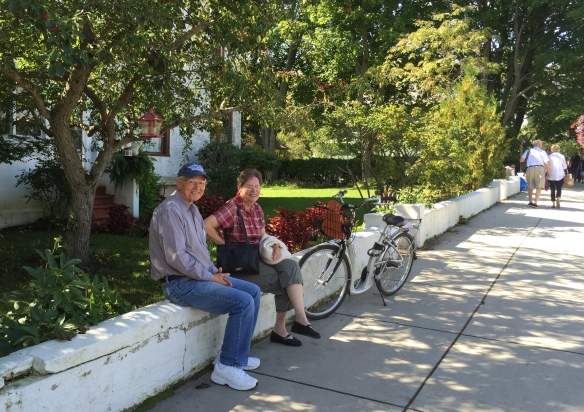 Lowell wanted to walk up to Grand Hotel’s shade garden, so we headed that way.  We’d stop and rest occasionally, like here at the corner of Cadotte and Market . . . 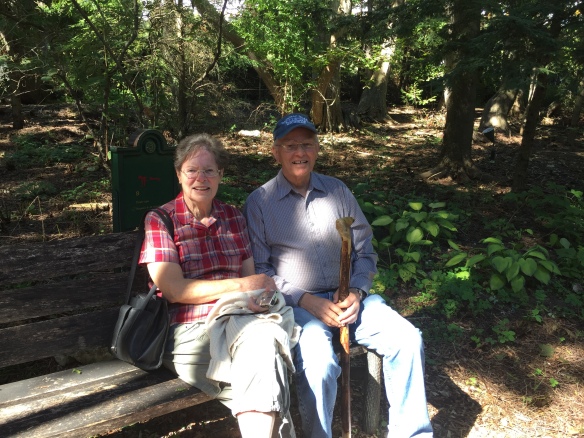 . . . and here, after we’d made it to the shade garden.  That beautiful cane Lowell is holding was a gift from Hilde and Bud.  Lowell loved it and used it the rest of his time on the island.  I have a feeling he’s using it at home too! 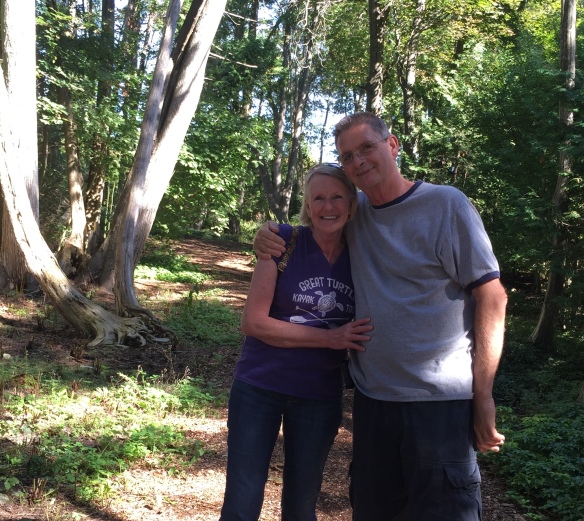 Sweet Hilde and Bud in the shade garden.

We were up early Wednesday morning to see Lowell and Faye off on the 8:00 ferry . . 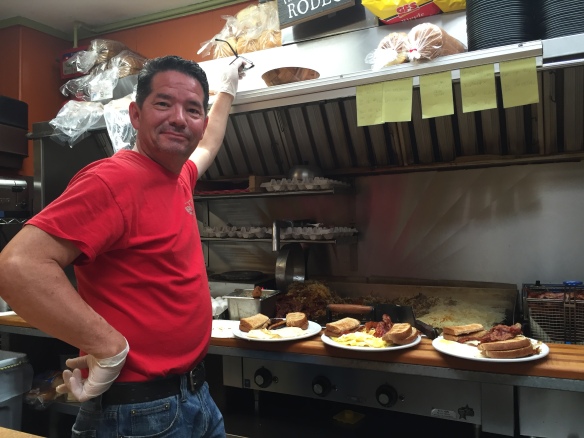 Hilde, Bud,Ted and I rewarded ourselves for getting up early by stopping by the Chuckwagon for breakfast.  Love sitting at the counter and watching Donny work his magic on the grill!

On Friday morning we were up and off to town again . . . 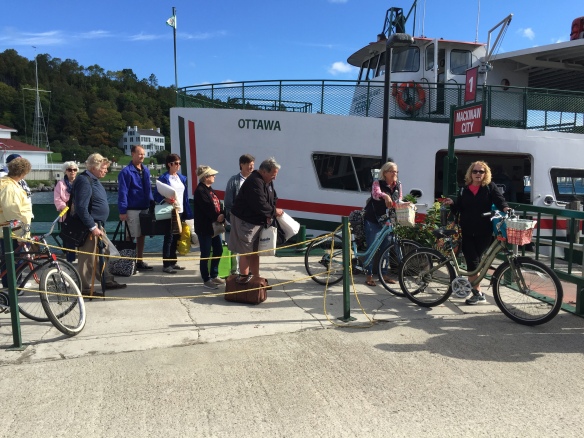 Going back home up Fort Hill, I stopped to watch groceries going by conveyer belt from a dray into the supply room of Doud’s Market. 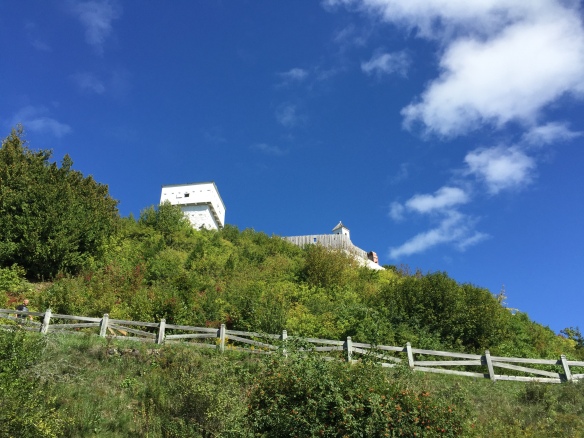 At Trinity Church, I took the path toward Turkey Hill. The fenced road above me is Fort Hill and a Fort Mackinac blockhouse against a beautiful Michigan blue sky.

There were several apple trees along Turkey Hill (Spring Street) – all full of ripe fruit!

View across the Jewel Golf Course from the top of Turkey Hill. 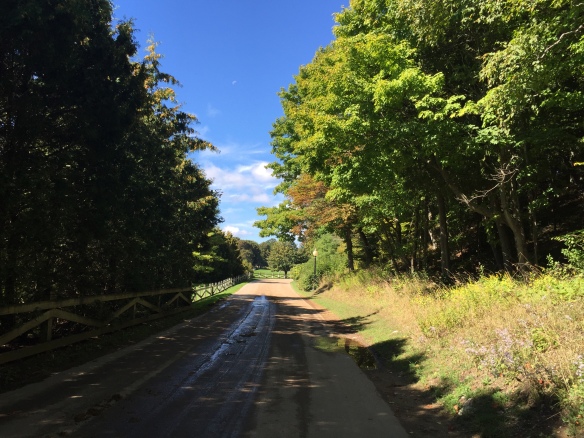 Almost to the condo, I spotted a little tinge of rust in a few trees near the road.

On Friday afternoon we walked up to the cemeteries, looking for fall color.  We didn’t find that much . . . . 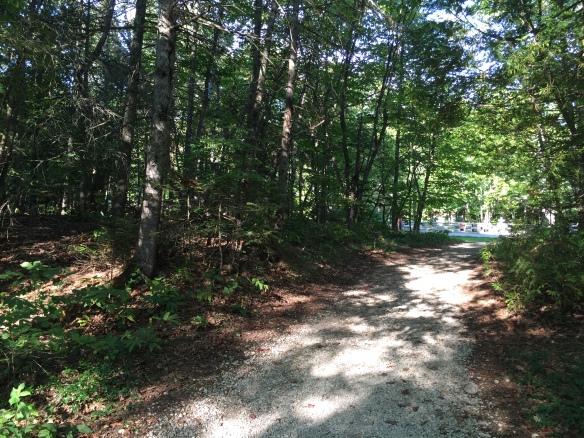 . . . but we sure enjoyed walking the trails – like this one leading from the cemetery to Turtle Park . . .

. . . and this one from Turtle Park to the Surrey Hill Carriage Museum (more visions of Bear).

How have I missed this giant butterfly created with colored rocks around two trees at the Wings of Mackinac Butterfly House at Surrey Hill?!

Walking through Grand Hotel’s stable late in the afternoon, we came across two buses, parked for the night and ready to go as soon as the sun comes up the next day.  There’s even a top hat resting on the bus lantern.

As I end this post, I turn for a moment to look out the kitchen window.  Two Hackneys are standing in the corral, and I rise and tap on the window.  They both look up at me . . . . 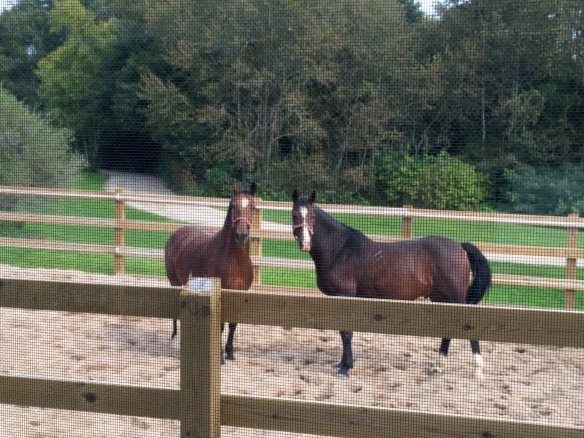 . . . and I know – as much as I feel myself beginning to prepare to leave for home in three weeks, and as much as I’ve missed our beautiful Florida home and wonderful friends, and as much as I know I can’t wait to pick up my Bodie-boy – I also know part of my heart will be staying here on Mackinac.

It’s Official!  The Grand Hotel/Carriage Tour Stable and Carriage Museum held its Open House this afternoon, and I can’t think of too many places in this world where a horse stable could have been more lavishly welcomed.

The event was announced as 5-7 p.m., and the public was invited to “come as you are”.  By 4:45 taxis and carriages and bicycles and walkers began to arrive, and as I write this at 7:35, I can look out our bedroom French doors and still see people strolling down the road from the stable.  It was THE place to be on this Thursday afternoon!

Dozens and dozens of bikes filled in the spaces between the trees across from the stable . .

. . . . and Carriage Tour wagons brought folks up from town.

There were tables filled with delicious goodies . . . . 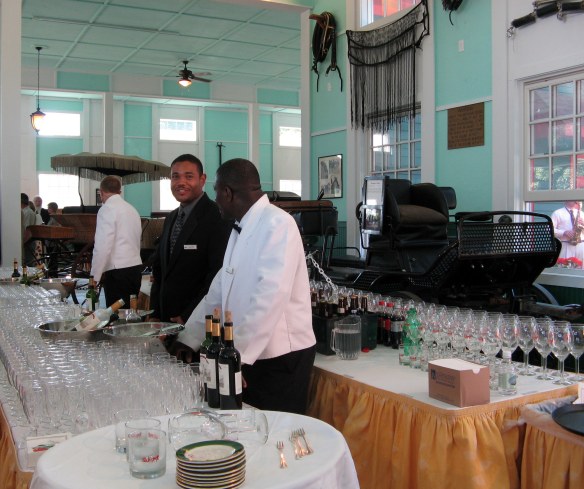 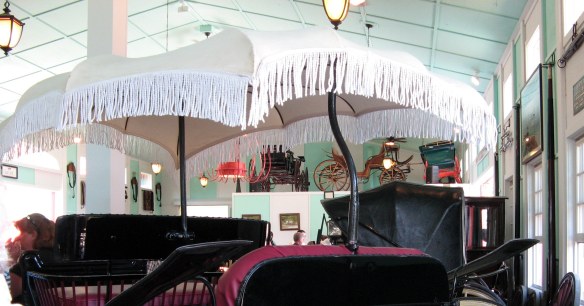 We hadn’t been in the stable for a couple of weeks, and it was amazing how different it looked from when we’d visited when Julie and the grandchildren were here.  The antique carriages from the Grand Hotel and Carriage Tours are beautifully displayed now for the public to enjoy.

Even the actual stable where the horses were looked different – the finishing touches had been placed on everything. 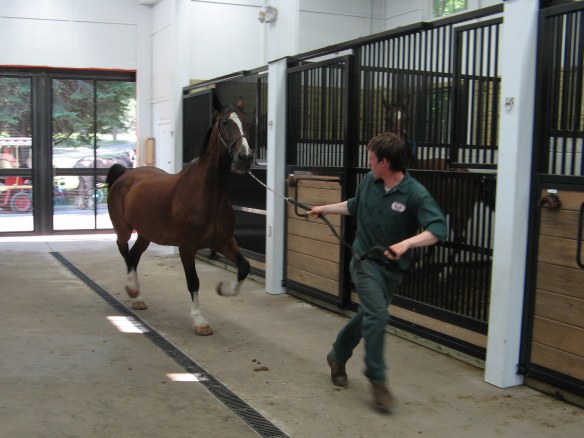 Someone asked a question about the Hackney gait, and one was brought out to “show off” that high-stepping prance.

Hundreds of people attended, and around 6 p.m. the official dedication was given. Dr. Vince Carroll from Little Stone Church pronounced the blessing of the stable, and Dan Musser III, President of the Grand Hotel, gave remarks . . . .

. . . as did Dr. Bill Chambers, CEO of Carriage Tours.  That’s Jeannette Doud seated on the left.

Carleton Varney, interior decorator for the Grand Hotel, chose the colors for the museum part of the stable, using the same green, white, and red that he used in several suites at the hotel. That chandelier was one of two given to the Grand by Varney and once hung in the New York Metropolitan Museum.  Folks, this is not your “typical” stable and carriage museum!

Every space is filled with memorabilia from the Island’s horse culture.

We walked out past the Grand Hotel jazz trio, which played for the event.

What an opening!  I’m going to walk back over tomorrow when I can look at everything again without all the people.  But, please, when you visit the Island on your next trip, this is a MUST SEE.  You have to climb an extra hill past the Grand, but it is so worth it – and it isFREE to the public.

A Few Random Pics From This Week

My friend Chris Ann crossed back to Mackinaw City from the Island at sundown this week, after taking a watercolor class from Mary Lou Peters, one of my favorite artists. She captured this beautiful sunset from a Shepler ferry.

Misty Martincheck from Shepler’s took this gorgeous photo of the Mackinac Bridge while on the first of Shepler’s Moon Cruises. 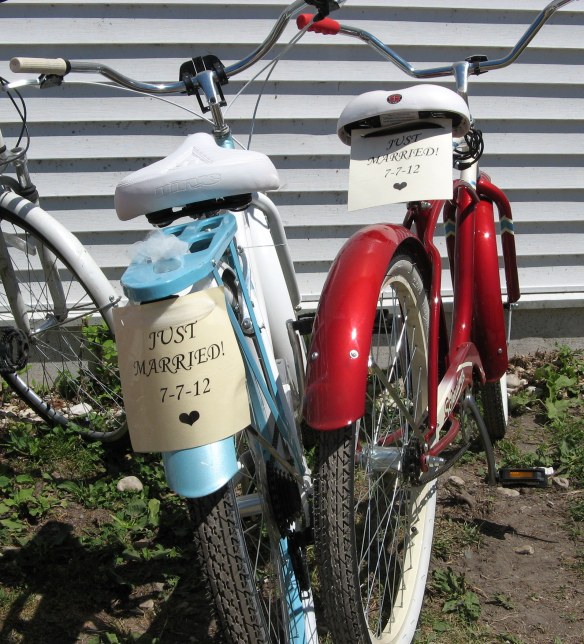 Spotted in the parking space for Cindy’s Riding Stable. Too cute! 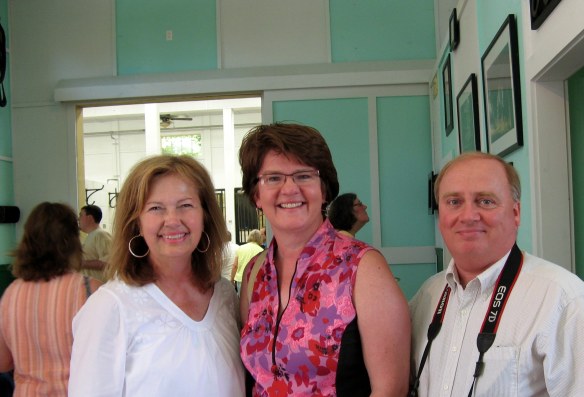 Blog fans Marie and David were at the stable opening tonight. So enjoyed meeting you both, and geez, I hope I remembered your names correctly!  Such a sweet couple!

That about wraps it up for the week. Next week I’ll have a story about a chance encounter on-line with a blogger in Georgia that turned into a very special story for both of us.  AND – we’re headed to Canada on a three-day trip!  More on that next week also.

Have a great weekend, and God bless.

Personal Note:  Received a call from Charlie (Frog) and Cathie this morning that brought smiles all around.  At his doctor’s appointment today, he was told his lung tumor had been completely removed with wide, unaffected margins.  The other great news is that they now believe what they thought was lymph node involvement in his chest might just be evidence of his continuing COPD, and not connected at all with cancer.  That would truly be spectacular news!  He won’t know for two more weeks what the course of other treatment will be – or if other treatment is needed.  All in all, wonderful news!  Charlie and Cathie both are so thankful for your prayers.  Don’t stop!