Patty and Buz (our condo neighbors from Oklahoma) flew in last week and were on the island until Sunday.  We had dinner with them a couple of nights at the Chippewa and saw them as they came and went during their week-long stay.  On Saturday, the four of us headed out for a bike ride that took Ted and I back along the same paths we had traveled last week (we wanted to show Patty and Buz some of those trails filled with fall leaves).  After showing them the Cave in the Woods and the Crack in the Island, we crossed over to the east side of the island to catch Fort Holmes.  Along the way, we sidetracked to Friendship Altar (another place they had not seen).  I’m not going to caption these photos a lot because I just talked about some of the same material last week – the colors HAVE changed though!

The weather was wonderful Saturday afternoon – bright sun, cool enough for 2-3 layers (even when peddling), blue skies, and autumn all around us.  Spectacular day!

Buz - trying to prove he could fit into a smaller part of the Crack in the Island than Ted could - and he did. Still no sign of that wooden bicycle though.

Lots of little planes taking off and landing while we were in the woods on the far side of the airport.

Patty and I back out on State Road. 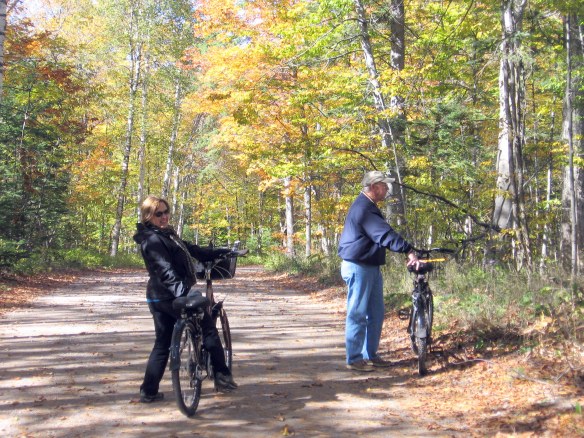 Patty was trying out her "new" used bike. They did what we did at the end of the season last year - bought bike #3 - used. One more year, and we should have 8 bikes between us - THAT should take care of all the visitors - with no one having to rent bikes!

From the top of the tower at Friendship Altar. 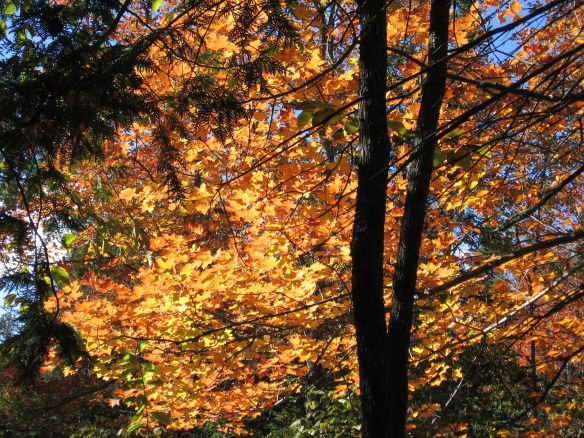 From the tower, we could look out on woods filled with spectacular fall foliage. 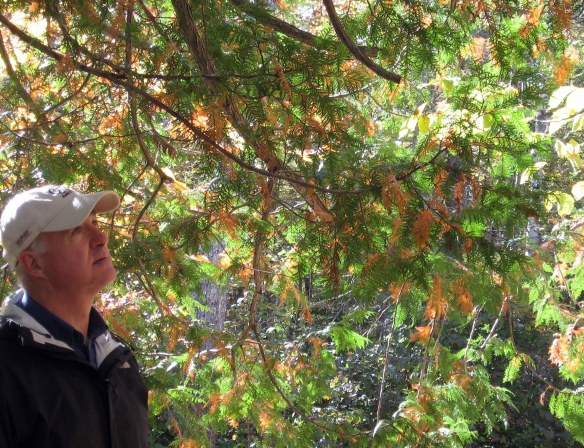 Buz - hanging out under a tree and unaware he's about to be photographed.

From Friendship Altar, we took Scott's Road to Leslie Avenue, took a right there and rode back to British Landing Road. A left there at the airport, then straight onto Garrison Road, which brought us out at the Mackinac Island Cemetery.

Treeline at Lookout Point - accompanied by one huge cotton-ball cloud. 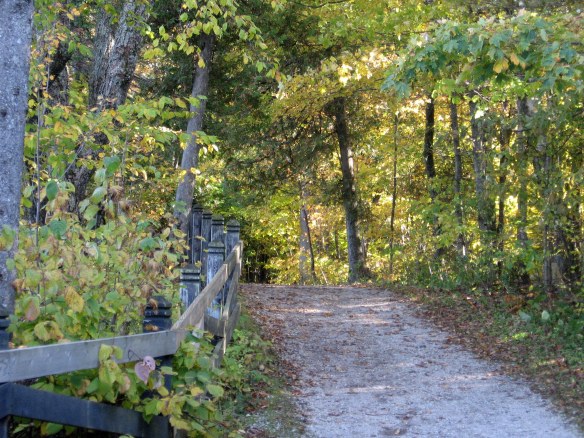 The path from Lookout Point up to Fort Holmes. There's just something about a path edged by a wooden fence. 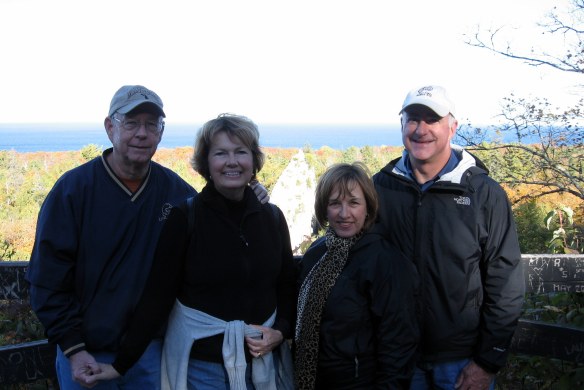 There were several visitors at Lookout Point ahead of us, and we all took turns taking photos for each other. This one is a little washed out in the background, but that's the top of Sugar Loaf between Patti and I.

On the way to Fort Holmes. We had left our bikes down at the corner of the cemetery.

Off the path to Fort Holmes is a little shed with this beautiful tree growing beside it. 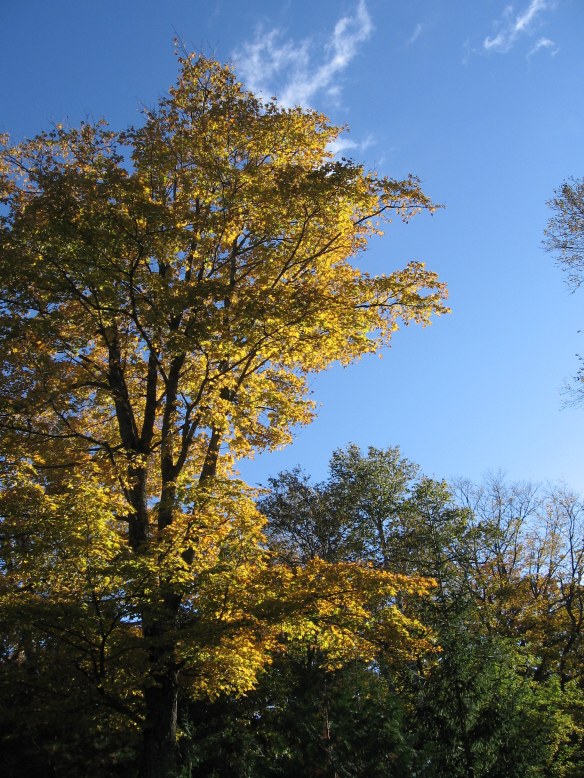 We were just up here what? Four days ago? Unbelievable how much the trees have changed in that short time.

As you reach the top of Fort Holmes, there are these three trees. One has been bent at almost a 45 degree angle by wind or snow, and I like the way the trunks have made way for each other. 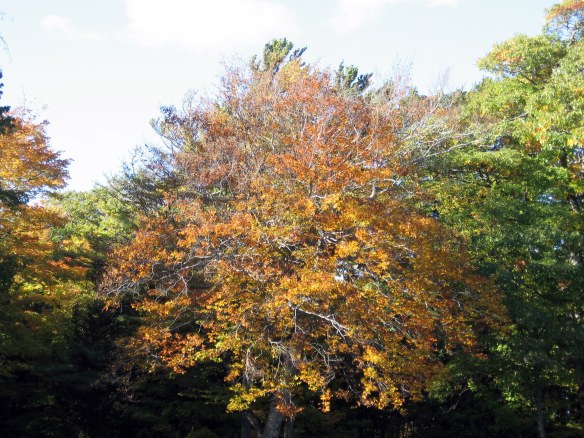 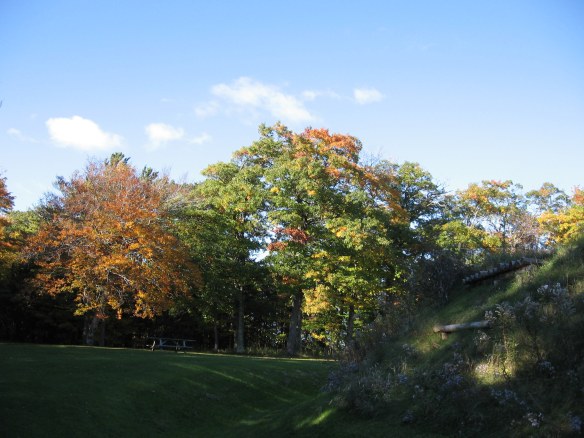 Looking through the trees from Fort Holmes.

Red Sumac against the fence boards.

Looking straight down Rifle Range Road from Fort Holmes to Fort Mackinac - and the lighthouses on the Straits.

Back in the day, nearly all island children owned horses. They'd ride them up to Fort Holmes on summer days, lead them inside the embankments of Fort Holmes to graze, and the kids would have an all-day picnic . . .

. . . like these young people were doing on top of the old fort entrance.

After we all attended church together Sunday morning, Patty and Buz left on the 2 p.m ferry going back to Oklahoma.  I got an email from Patty a little after midnight saying they were safely back home.

This afternoon I walked outside with Maddie and Bear a little after lunch.  Before I got to the corner and crossed over to the big lawn, a couple riding down on bikes through the Village called out “Are you Bree?”  I yelled, “Yes!”.  They pulled over, and we stood out in the yard and talked for over 30 minutes before I ran inside to get Ted to come take a photo.

Karen and Gene Seeley from Flint, Michigan. I think they told me that it was actually their son Eric, a huge Mackinac Island fan, who discovered Bree's Blog, but Karen and Gene are fans also. Hello, Eric! Wish you had been along!

And a little TV surprise! 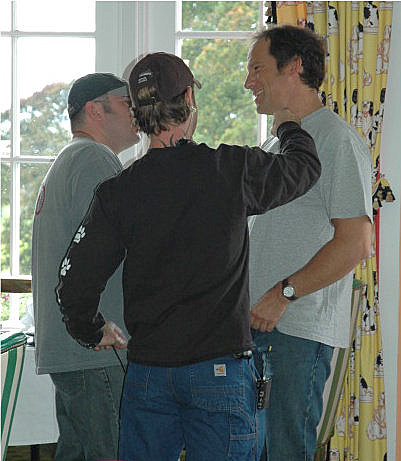 And I missed him. But not these two twin sisters, who are THE BIGGEST MIKE ROWE FANS IN THE WHOLE, ENTIRE WORLD!

In the ten years that Ted and I have been coming to Michigan, we have covered a lot of ground on Mackinac Island.  For the eight years we visited before buying last summer, we would stay at the Chippewa Hotel for two weeks and spend at least half of each of those 14 days hiking around the island, map in hand, making sure we had seen every little point of interest that was marked on that map, no matter how insignificant.

We visited Arch Rock, Sugar Loaf, Anne’s Tablet, Skull Cave, the Cave in the Woods, the Crack in the Island, and Devil’s Kitchen.  For ten years, we have brought back the same (by now almost falling apart) map we had picked up on our first visit, and we have marked off the trails in red ink as we have walked them.  There aren’t  many trails left now that don’t have a red mark indicating the Hortons have been there.

Someone came into the Visitor’s Center while Ted was working one day last week asking about Friendship Altar.  It is just a little speck on our map (believe me, we got it out and looked), but for some reason, we had never tried to find it.  So this morning, we got the bikes out, put on our helmets, and went on a mission to visit new territory.  In the back of my mind was this annoying  little thought – how many steps would be involved?  But no, I thought, we were on bikes, so steps were out of the question.

We biked through Harrisonville until we hit Annex Road, where we turned right.  A couple of minutes later, we turned left onto British Landing Road and started out toward the northwest side of the island.  We passed Wawashkamo Golf Course which was the site of a significant battle in the War of 1812.  Now the beautiful course is one of the last few traditional Scottish Links courses in the country and is a great course for the golfer who enjoys golf in the rough.

When we had almost reached British Landing, we turned right onto Tranquil Bluff Trail, which is literally just a little dirt path.  This trail runs near the coastline from here all the way to Arch Rock.  We have hiked it a lot in the Arch Rock area, but I had never entered it on a bike from either end.  Ted didn’t make me feel too confident when he told me that it was near here that Blake had torn up my bike last year when he and Ted and Matt had gone mountain biking.  The shaft that the seat sits on had literally shattered.  It is a very rough trail in spots.

We both walked our bikes in because the path was pretty rough, with lots of tree roots and rocks.  But soon it evened out, and we could ride.  We hadn’t gone very far at all when Ted spotted a wooden tower in the woods on our left.  I would have never seen it, but Ted happened to be looking in the right direction at the right time.  There in the middle of the woods was a tall platform sitting at the edge of a bluff.  We parked our bikes and walked to it.  From the top you could see St. Ignace.

Also from the top, I discovered the first signs of fall.  Above our heads, the leaves of a sugar maple tree (could be wrong on that tree species, but it’s my best guess) had just begun to turn yellow.

While I was getting all excited about the fall leaves, Ted had already climbed down the platform and gone to explore further.  A shout of  “Hey, I found the Friendship Altar!” brought me down off the platform, but I couldn’t see Ted.  “Where are you?”  I called.  He called back, “Come down the stairs!”  I KNEW it!

At the bottom of the stairs was a huge rock rising straight up through the trees.  A nearby sign explained that this, like Arch Rock and Sugar Loaf, was an isolated stack of brecciated limestone.  Brecciated means that the rock has been fractured and recemented back together over thousands of years, and the reformed conglomerate is harder than the surrounding rock and soil.  When this area was covered by the ancient Lake Nipissing (around 2000 B.C.), the water washed away the softer materials and separated Friendship Altar from the ancient coastline or bluff on which the overview platform was built.

As we climbed the stairs back to the top of the bluff, I noticed this tree that appeared to be growing directly out of a rock.  The roots had to be touching soil somewhere, but I couldn’t see where from my vantage point.

We went back out to British Landing Road and turned right, then turned right again before getting to the Cannonball Restaurant.  Now we were on Scott’s Road, and we followed that until we turned to come out at the 3-mile marker on the highway around the island.  Almost as soon as we turned back toward town we came upon a group of people crowded around a lady who had fallen off her bike.  She had injured her knee, but the worst  injury was one of her fingers, which was very visibly broken.  Ouch!  They had already called 911, and the ambulance arrived within a couple of minutes.  Before we reached town, it came around us taking the lady to the Medical Center.

We passed someone sunning on a rock at the edge of the lake.  We have been blessed with perfect weather this week and, everyone has been out enjoying it.  From what the weather people are telling us, it is going to be beautiful right through the Labor Day weekend.

We went into town and ran errands and stopped to talk to several people we spotted on the streets.  Then we biked home.  By Ted’s odometer, we had covered almost nine miles, which seemed further because we were on trails most of the time instead of paved roads.

It was a great day on the island,and I wish every one of you reading this right now could have been here to enjoy it with us.  Maybe one day we should have a Bree’s Blog Reunion Week on the island.  How cool would that be!