9/11/22 Note: I posted the blog below on September 12, 2013 about the return of Mackinac’s replica of the Statue of Liberty to the island. You’ll notice at the end of the post that funds were being raised to have Lady Liberty placed permanently in the marina area, and that she would be housed in the Stuart House Museum until that time. By the next summer, funds were in place, the new pedestal was installed and, just in time for July 4, 2014, Lady Liberty was placed permanently on the lawn of the Mackinac Island Marina.

Original post: On the 12th anniversary of that September day when all our lives changed forever, Mackinac Island’s own Statue of Liberty returned to her home and became part of the Island’s Patriots Day celebration.

The statue was originally donated to the Island in 1950 by the Boy Scouts of America, marking their 40th anniversary, which had the theme “Strengthen the Arm of Liberty”.  Over 200 of the statues were donated to communities in 39 states, but the statue here on Mackinac is the only one given to the State of Michigan.  The statues are about 8 1/2 feet tall – without a pedestal – weigh about 300 pounds, and were made by a company in Chicago.  Our statue’s big sister stands in New York harbor, is more than 305 feet tall from the ground to the top of her torch, and weighs more than 150 tons.

The Statue of Liberty replica on Mackinac Island has been used every fifth year to commemorate the attacks on 9/11/2001, and the Patriot Day services were conducted at that  location in 2006 and 2011. 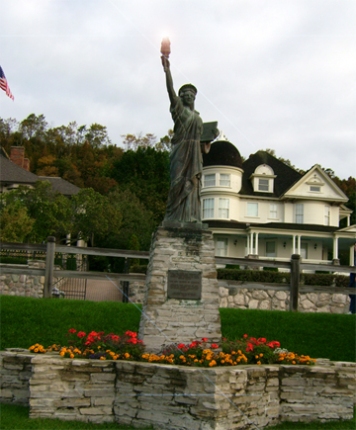 The replica withstood 62 years of harsh northern Michigan winters and was in need of the kind of repair work only a specialist could handle – dents in the copper skin, seams that needed to be ground out or filled in, and spikes on her crown that  needed to be replaced. Masons, excavating crews and landscapers all needed to be involved.

American Legion post 299 on Mackinac Island wanted to refurbish the statue and bring it back to its original form.  Post 299 Commander Paul Wandrie, said, “We are calling our drive to repair and relocate this statue, the ‘Save Our Statue’ or ‘S.O.S.’ Project.”  The City of Mackinac Island also supported the project, the cost of which was estimated at approximately $61,000. 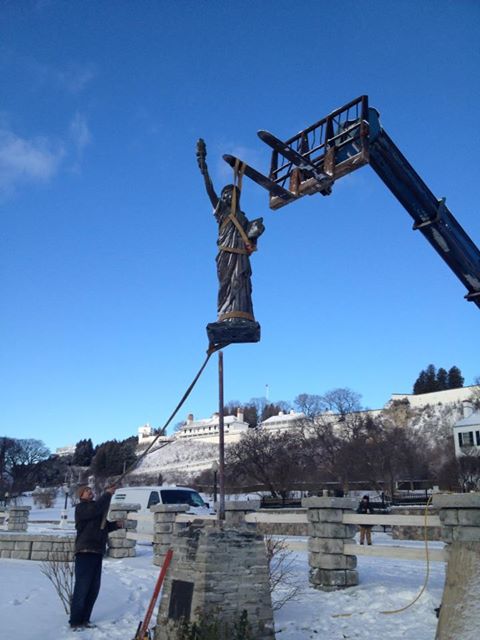 On November 28, 2012, the statue was removed from her pedestal, with Winberg Masonry, Belonga Excavating, Davis Construction and Venus Bronze Works, Inc. involved in the project. 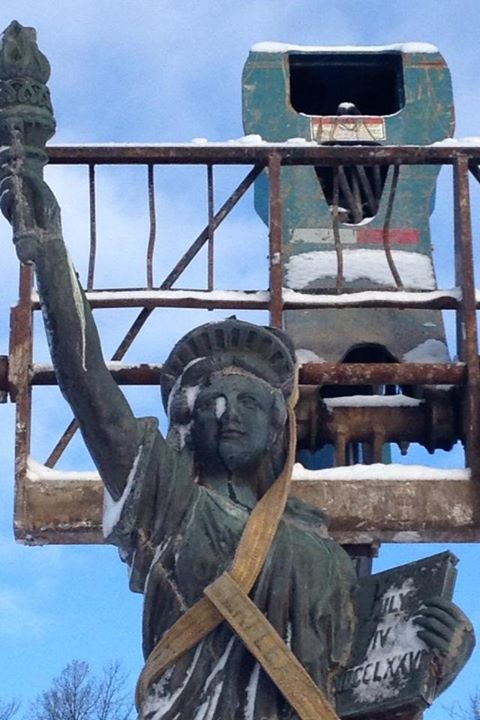 The statue was shipped to Venus Bronze Works in Detroit for the winter, where she underwent a complete makeover. 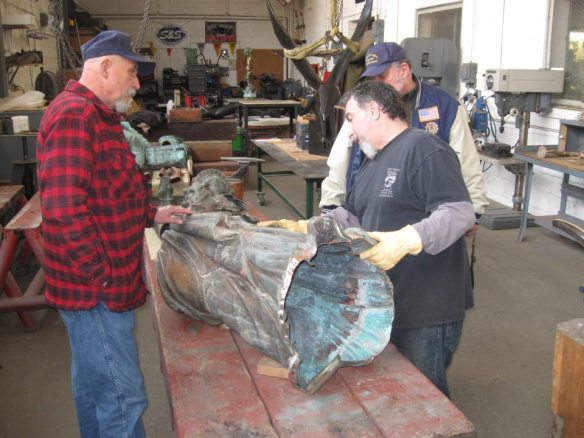 On April 1, 2013 Paul Wandrie and his two brothers checked on the Statue of Liberty replica in Detroit. Giorgio Gikas, President of Venus Bronze Works, was their tour guide around his shop.  Wandrie stated, “Since he is preparing to solder the sections back together, he must insure that these sections are perfectly cleaned. The bottom portion will be attached to a brand new base that will be made of bronze.”

When Wandrie was contacted that the statue was finished (the pedestal still remains to be done), it all fell into place that the statue would return to the Island as part of the Patriots Day celebration on September 11, 2013.

Shepler’s Ferry donated the use of their freight boat, the Sacre Bleu, for the trip across the Straits, and boats from Arnold and Star Ferry Lines, the Mackinac Island Fire Department and the Mackinac Island Historic State Parks planned to join the boat parade accompanying the statue on her crossing.  Private boats were also invited to join in.

Paul Wandrie and Chris Shepler both granted me permission to come across on the Sacre Bleu with the statue, and that is how I came to be aboard when Lady Liberty returned to the Island.

Emotions were running just below the surface yesterday and kept threatening to emerge.  I boarded Shepler’s to travel to St. Ignace (where the statue had spent the night in a Shepler warehouse).  The statue’s Honor Guard, made up of Post #299 Commander Paul Wandrie, Mackinac Island Police Officer Ken Hardy, Mackinac Island Fire Fighters Jason Kladiva, Ron Langsworthy, and Jamie Bynoe, and EMT Mark Bielinski, were all aboard the same boat.  As I rode over I was thinking about the events of 9/11/2001 and remembering – as we all do – exactly where I was when I heard that breaking news broadcast when the first plane flew into one of the Twin Towers.  I was sitting at my desk in the Public Information Office of the Dougherty County School System in Albany, GA.  The morning was just beginning, and we had a day packed with assignments, paper work, and visits planned into several schools.  In the incredibly short time it took for a fellow worker to rush in from another office and shout, “Quick, turn on the TV!” (our office had the only TV in our 3-story building, as we were charged with keeping up with emergencies – weather or otherwise), all plans – and our entire world – changed.

When we walked into the St. Ignace warehouse and first saw Mackinac’s Statue of Liberty – refurbished, no dents, all spikes of her crown in place and sparkling clean, I began to feel tears welling up and a throat lump forming. 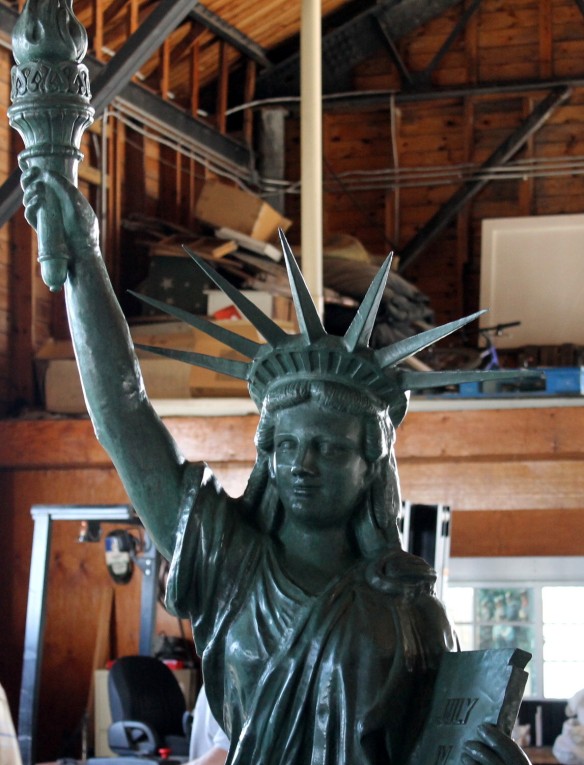 Compared to her big sister in New York City, she is shorter and weighs less; but she is still the United States’ symbol of freedom from tyranny and oppression, and – even in a warehouse – she carries the dignity and power of what she symbolizes like the great lady she is. 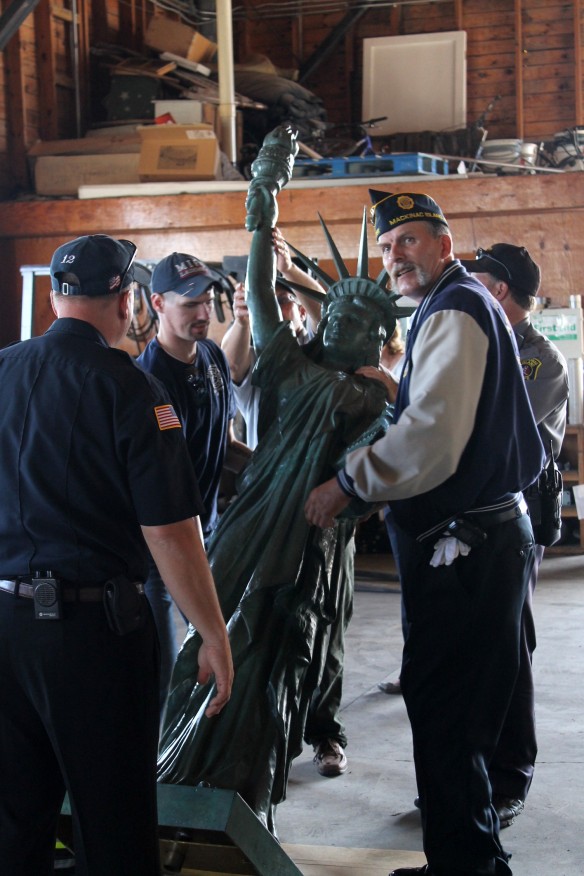 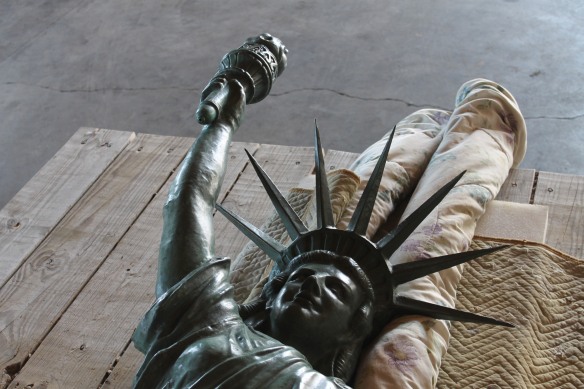 . . . and placed her on the flatbed wagon on which she would rest during her trip to Mackinac. 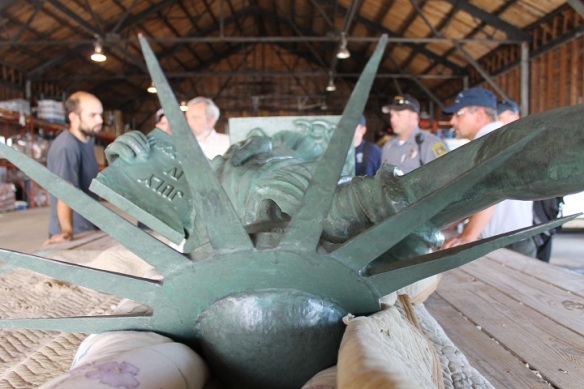 The gentleman on the left is John Eagan.  It was John and his boss, Giorgio Gikas, President of Venus Bronze Works, who did all the meticulous work on Lady Liberty.  The statue was taken apart, dents were removed, and new cooper sheets were applied – followed by new layers of wax and a patina for a glossy finish.  Her old book and stand had been wood on the interior, and it had rotted.  The book and stand are now hollow and covered in copper and wax.  There are copper supports that run through the statue like tree branches for added support.  Eagan said, “The more we worked on it, the more it became a real labor of love.” 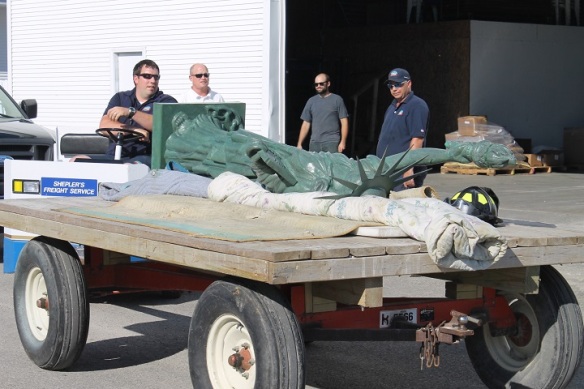 The statue was pulled outside . . . 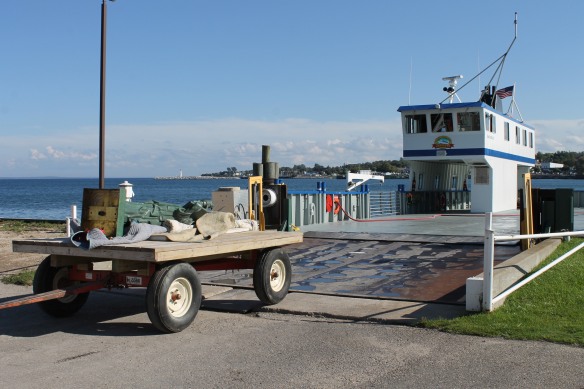 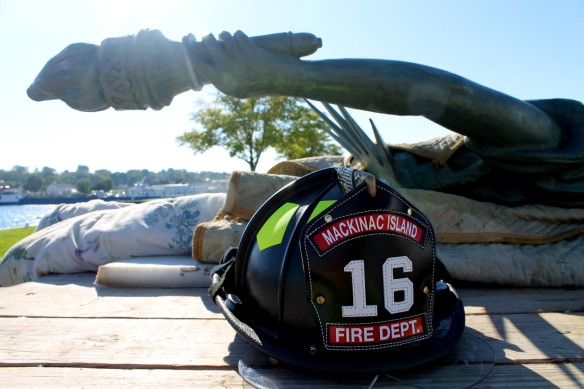 One of the firemen placed his helmet next to Lady Liberty’s face, and it was then the emotions of the massive loss of the 9/11 event coalesced into tears that spilled over. 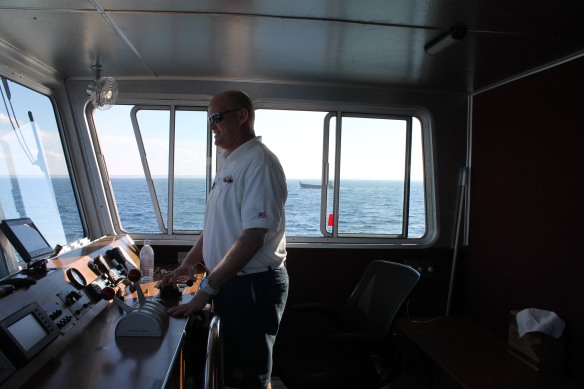 Chris Shepler piloted us across the Straits as other vessels began to fall into place with the Sacre Bleu. 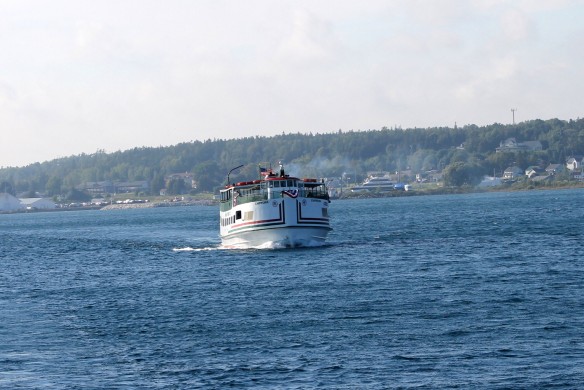 We were joined by Arnold’s Chippewa . . . 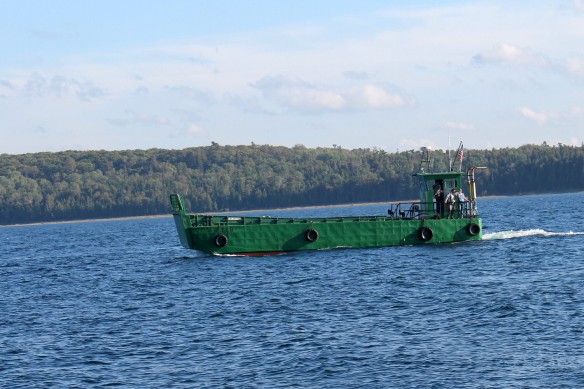 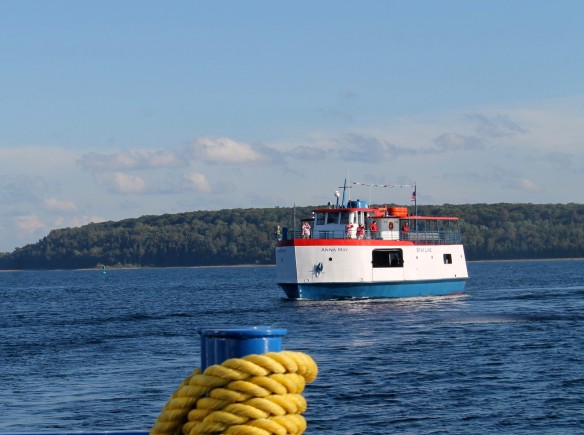 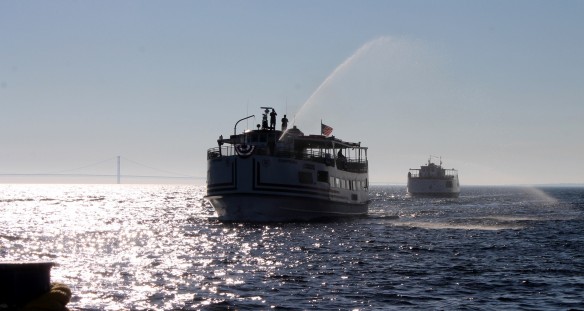 As we sailed into the harbor, the Chippewa’s fire hoses, manned by St. Ignace Fire Department Lt. Matt Bowlby and Fire Fighter Nate Montie, opened up with a huge spray . . . 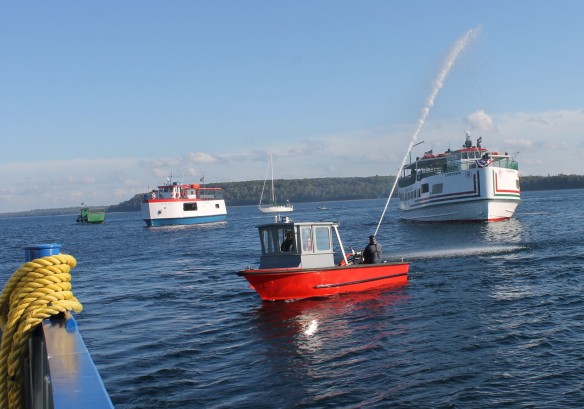 . . . joined by the spray from the Mackinac Island Fire boat. 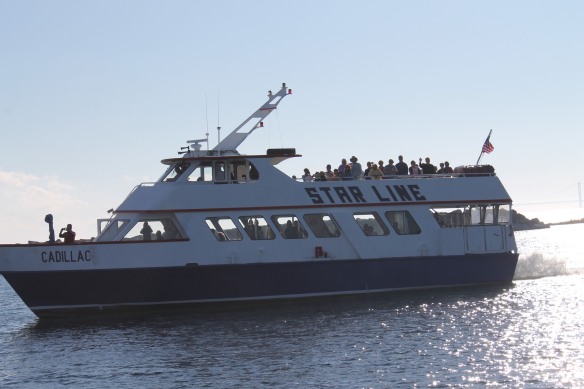 Passengers aboard an outgoing Star Ferry all stood as we passed. 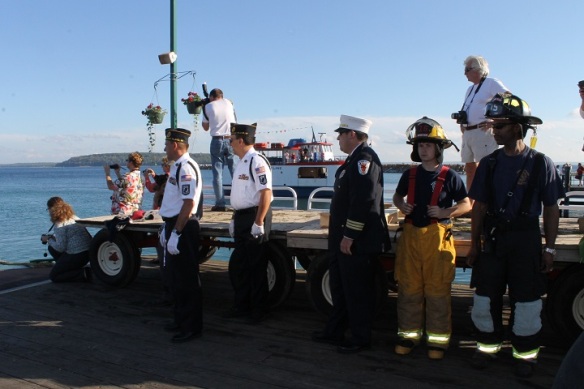 A Color Guard and a large crowd awaited the statue at the dock . . . 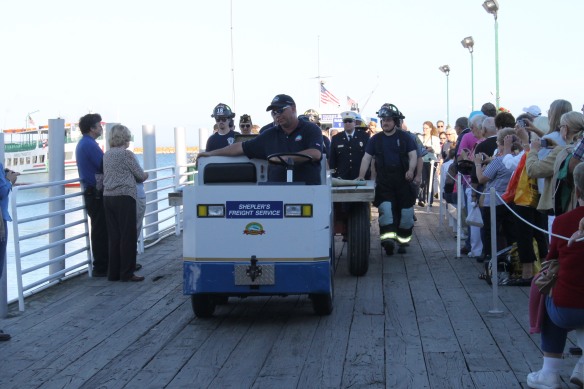 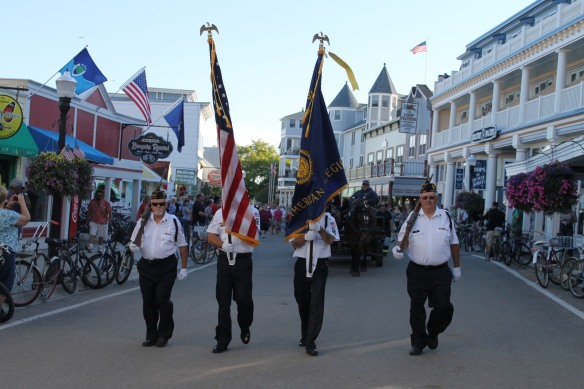 . . . and began her trip through the streets of Mackinac to the Stuart House Museum. 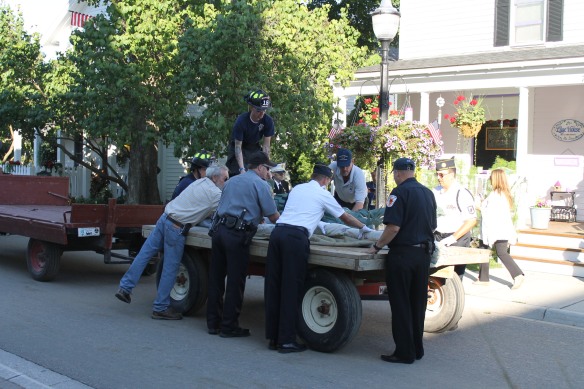 The Honor Guard gently removed the statue from the flatbed . . . 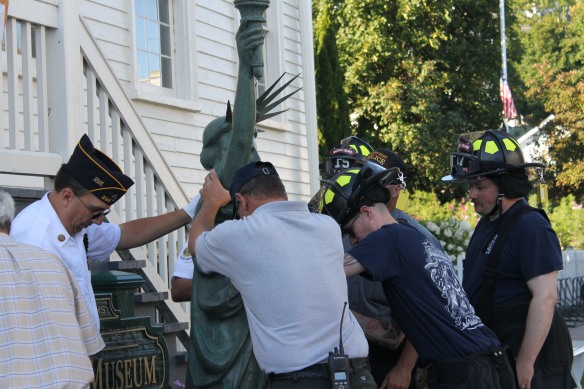 . . and stood her gleaming and straight back on Mackinac Island, her home since 1950. 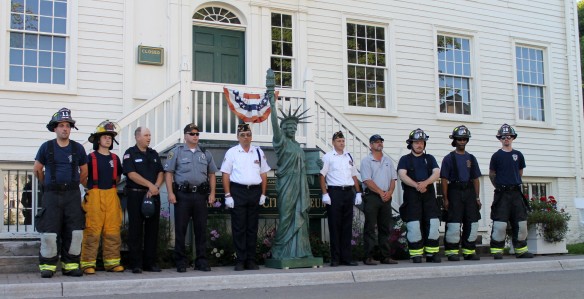 Back home and surrounded by the people of Mackinac Island.

The Patriots Day program was filled with speakers who spoke eloquently and emotionally about the bravery of Americans, not only on 9/11, but during all the wars in which we’ve fought. (Click on individual photos to enlarge.) 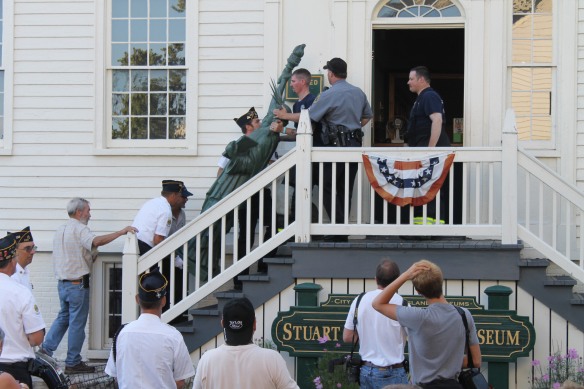 After the program and time for photo opportunities, the statue was carried into the Stuart House Museum . . . 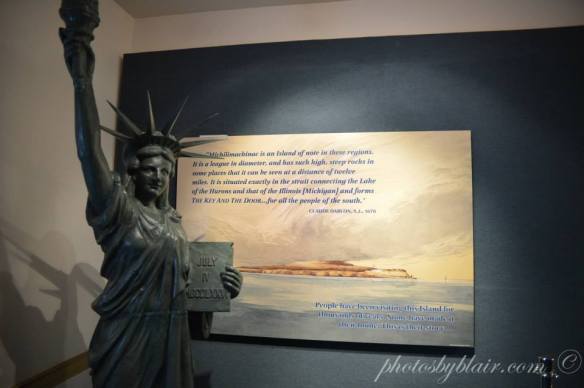 . . . where she will remain until funds have been raised to complete her pedestal. (Photo: Steven Blair)

When the remaining funds have been raised, the statue will be centered approximately 100 feet west of where she formerly stood, which will give her a more prominent location.  At this new spot, she will be seen by more people entering the harbor, and she will be more easily seen from the roadway.

The project to refurbish this replica of a national treasure has in a few short months raised all but approximately $17,500 of the $61,000 needed.  Funds have come in from individual donations by  Island residents, by visitors to the Island, from the State of Michigan, and from across the country.  On September 11, 2013, Paul Wandrie said, “Thank you to everyone that has helped us along the way, and we look forward to receiving the rest of the funds so we can get Lady Liberty back to the marina. “

It’s on days like this that the magic of Mackinac can almost physically be seen winding its way along the streets and through the crowds.  The people of Mackinac Island have always been a close-knit, kind and compassionate community.  When something of theirs is in need of repair or replacement, they come together and find a way to make it happen.  So it’s been with the refurbishment of Mackinac Island’s replica of the Statue of Liberty, and so it will continue to be for generations to come.

Stand tall, Lady Liberty.  We look forward to you soon taking up your new post at the entrance to the harbor!