On our regular late afternoon outing with Maddie today, we chose to walk the lakeshore trail that winds between the Mission Point Resort Executive Putting Green and Lake Huron.  I know I usually show the gorgeous flowers along that trail, but it occurred to me today that I never show the “wild” areas.  You see, not everything on Mackinac is manicured and formal.  In fact, the vast majority of the island is in its wild and primitive state.  I love getting past Main and Market Streets and into the Mackinac woods.  Even though I dearly love all the lush and incredible flower gardens, it’s the wild part of the island that draws me back year after year.

Being where we are in the Mission right now, I haven’t gotten up into the interior of Mackinac at all except for that buggy ride out to the Woods Sunday evening.  When we move “up the hill” in a couple of weeks, you’ll be seeing a lot more “wildness” in my photos. 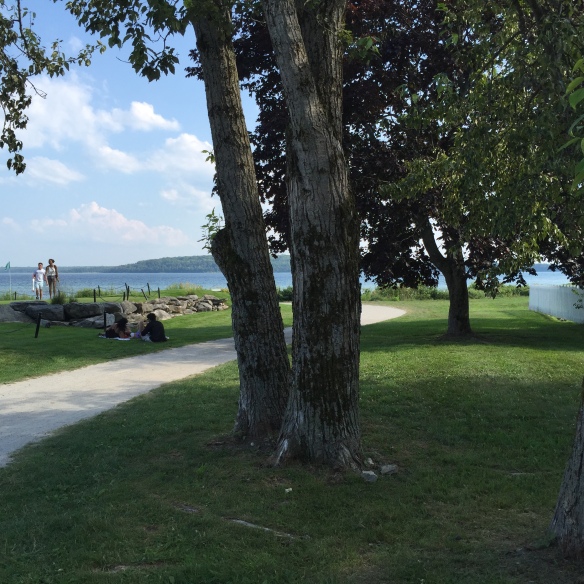 The path turns off Main Street just as you reach the Mission Point Resort putt-putt course.  Where the path makes that first left turn, there is a big beaver lodge just beyond the shore.  I haven’t managed to be there at the right time to get a photo, but there’s been a whole beaver family living and working in that spot for almost two years now.

Between the path and the lake, everything is natural.  See that little circle of water that looks like a small pond.  It’s a great swimming hole for island kids and visitors.  Don’t be fooled by its smallness though.  Matthew went swimming there and said it was way over his head. 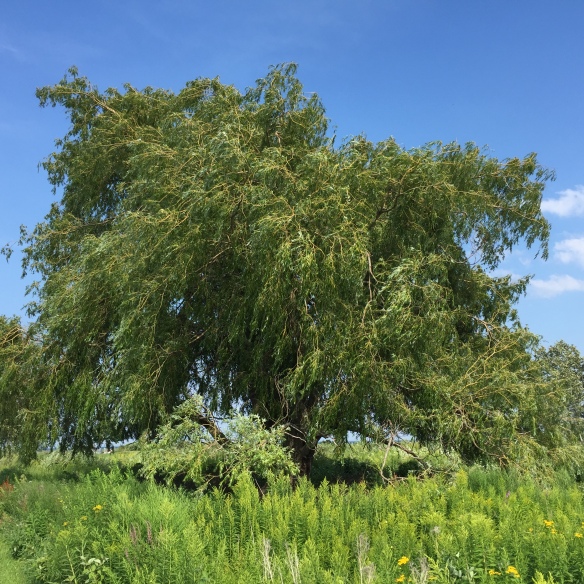 Probably the largest Weeping Willow tree I’ve ever seen. With the wind blowing this afternoon, it was beautiful to see the branches dipping and swirling like a group of green-clad dancers.

You can see in this pic how the wind was kicking up.  All the trees are leaning sideways! 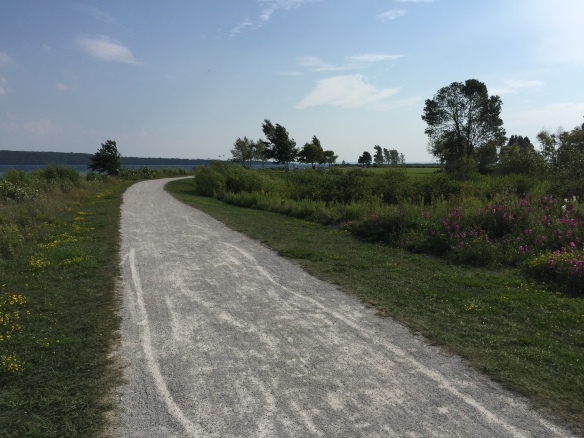 I love this pathway!  Water as far as you can see, and wildflowers galore! 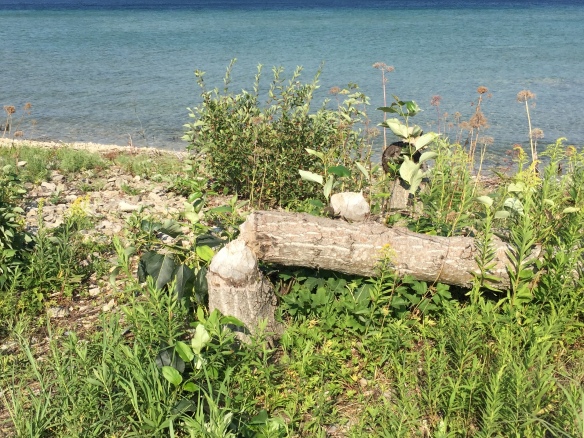 Remember me mentioning the beavers.  They are busily cutting down several trees along the shoreline.  Some are small . . .

The pathway deadends into the road around the island, so we turned back toward town.  This sign warns against climbing up this steep cliff.

Standing at Small Point Inn and shooting back toward the lake.  You can see cyclists on the path where we were just walking.

Almost to the condo we spotted this unbelievably gorgeous 8-month-old Golden Retriever puppy and her owners.  Yes, I went all blubbery over her.  Maddie, on the other hand, didn’t care for her at all and tried to pick a fight.  Have I ever mentioned that Maddie does NOT like other female dogs?  Our little DIVA. And yes – I got the name of her breeder here in Michigan.

One last pic from tonight.  As we were leaving the condo to ride downtown for ice cream after dinner, we were treated to a wedding carriage!   Happy bride and groom – just married at Mission Point.

Today was the warmest we’ve had since we arrived.  Close to 85 on the island, and for Mackinac, that’s a heat wave.  Supposed to cool off tomorrow though.  All is good.

Wish you were here!