When I wrote the post on Wednesday,  I thought I’d have nothing to talk about tonight except packing boxes.  Amazingly though we’ve spent a lot of time outdoors this weekend – going first one place and then another, or just out with Maddie and Bear.  Of course that means putting packing into a higher gear for the next two weeks, but so be it!

Our closing date is Oct. 29, a Tuesday, and we’ll be leaving Mackinac on either the 30th or 31st (I typed that sentence really fast so I couldn’t start thinking about it).  Ted wants to be at the Bottom for the Georgia football game, and with that goal in mind, I have no doubt he’ll be there at the appointed time.  We still can’t talk much about leaving without getting a case of the “sentimentals”, but time is the only thing that will take care of that . . . time AFTER we leave the Island.

We’re still “homeless” for next summer, but we have 2-3 irons in the fire, and we’re hoping one of them works out.  Sure would like to get that buckled down before we leave the Island.

Friday started off as another October gift – sunny skies and mild temperatures.  This time last year we couldn’t venture out without several layers, and here we were walking the dogs without even a light jacket!  But when I happened to glance outside late in the morning, I thought, “Oh, no! Something’s on fire!”  But it wasn’t smoke, it was fog . . . rolling in from the lake in huge swirls.  And that’s how fast things change in Michigan!

Late in the afternoon I grabbed the camera and walked a few blocks further up the hill . . . just as workers were coming home from town.

The fall colors, shrouded in fog, were eerily beautiful . . . .

. . . and seemed to pop out even more brightly than on a clear day. 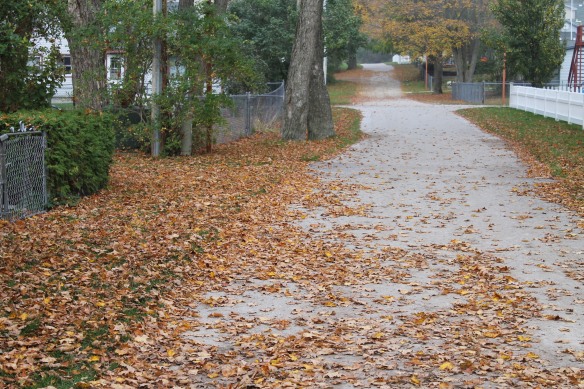 . . . and streets are covered in crunchy leaves. 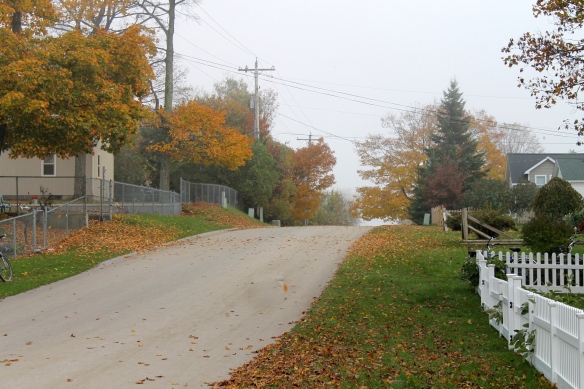 I turned around at 7th Street and started back home . . . 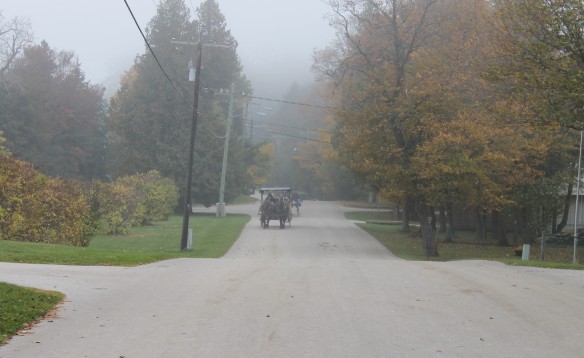 . . . and standing in the middle of the road by the condo to capture the ghostly carriage coming up the hill.

On Saturday night I put together my old standby – corn salad – and Ted and I went downtown to a friend’s going away dinner.  The host has an apartment over the Island Slice Pizzeria, and I took that as an opportunity to shoot a few photographs of Main Street from a different vantage point.

The lights were just beginning to come on downtown when I began to take pics from the apartment’s balcony. 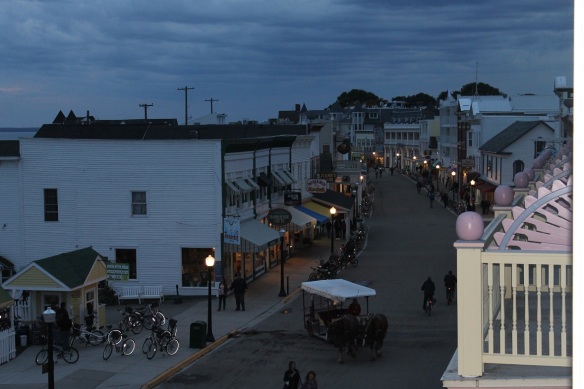 When I went back inside I was told that the ladder in the corner of the room led up to the roof.  With Ted’s help, I managed to get up there without incident, and, oh my goodness, what a view!

Rain clouds were gathering as I looked over the roof tops toward the lighthouses. 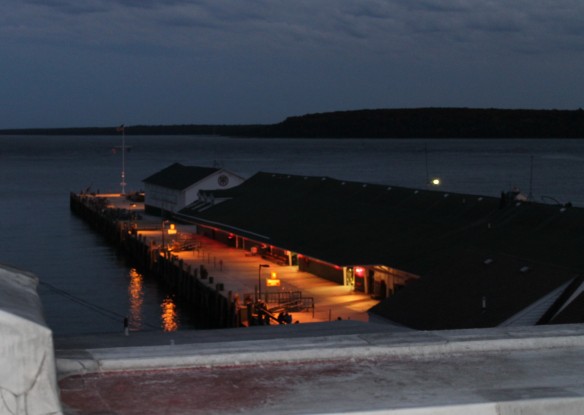 Turning around to face toward Market Street, I could see Fort Mackinac.

The lights of the Iroquois Hotel glow softly against the dark sky.

After I made it safely down off the roof and we’d eaten dinner, the threatening rain came.  I walked back out on the balcony to capture the street lights reflecting off the wet pavement.

Oh by the way. The hit of the party was a yellow lab puppy named Millie . . .

. . . who was doggone tired after a day exploring the Island and went soundly to sleep on her mom’s sweater. 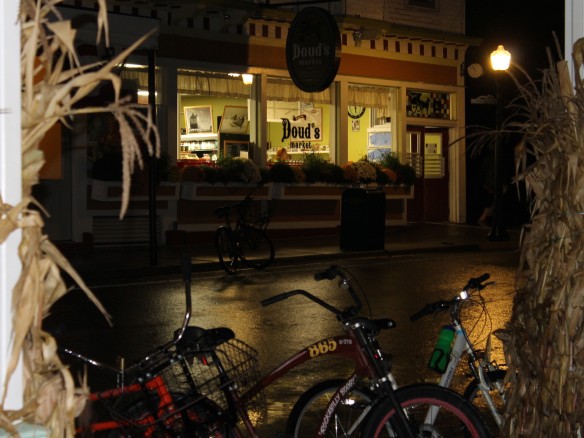 After dinner – as we waited for a taxi.

A slow drizzle accompanied us home. 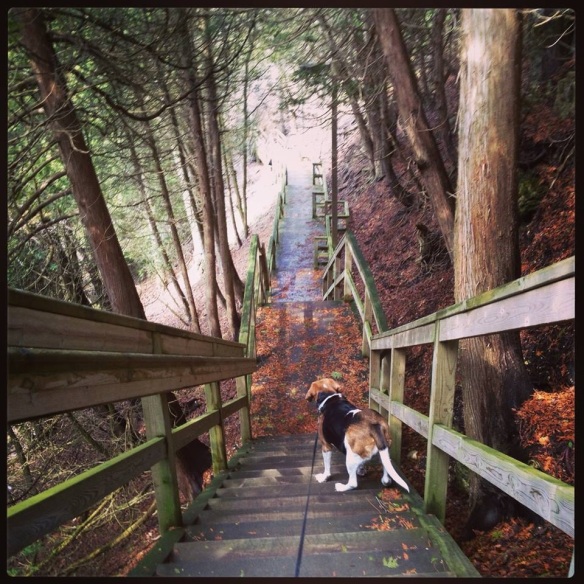 Nicole Doud’s baby shower was this afternoon at the Jockey Club. Nicole is one of the sweetest people I know, and next summer we are all going to be fighting to babysit Baby Doud!

The Jewel Golf Course – after the baby shower.

Just before I started home this afternoon things really got busy on Cadotte! With the summer flowers still blooming and the fall leaves shouting for attention, you hardly know where to look first!

Stephanie Fortino’s feature about Bree’s Mackinac Island Blog came out in this month’s Town Crier. Stephanie did a great job of writing the story and capturing my love for Mackinac, its people, and my readers. I’m trying to get permission to reprint the article on the blog, and I’ll let you know later this week how that turns out. Thank you, Stephanie!