In a copy of the Mackinac Horsemen’s Association publication, “Mackinac Hoofbeats”, Phil Porter (Director of the Mackinac Island Historic State Parks) talks about the importance of the horse on the island.  He says, “I don’t think people always realize the full impact of the auto ban,” referring to the 1898 prohibition of automobiles.  “Because cars were banned so early, the island never changed to accommodate an automotive world.  As a result, we have narrow historic streets, no stop signs or stop lights, no gas stations or fuel fumes, and barns that still have horses.”  He goes on to say that “It’s the horses that help create the historical character that makes Mackinac unlike anywhere else in the world.”

No wonder the Mackinac Horsemen’s Association felt so strongly about creating a festival that revolved around that four-legged creature the island so depends on.  The horse is indeed “King” here, and now it has a festival to celebrate that fact.

The Breed Show was perhaps my favorite part of the Festival.  It was a chance to learn about and see “in person” every breed of horse on the island – there are twenty, according to the Festival program.

Before I get to the photos, let me give you a little “Horse 101” – just a few things I learned about horses in general by attending the Festival of the Horse this year: 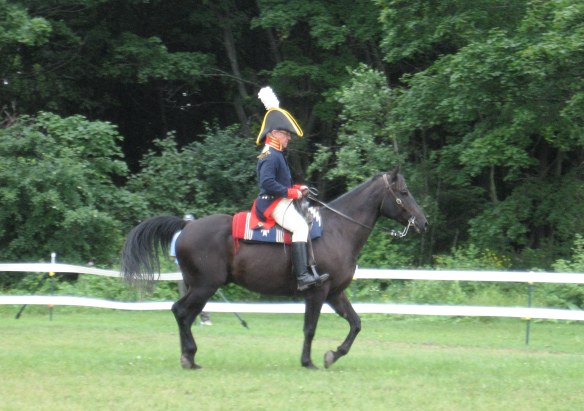 Phil Porter led off The Breed Show dressed as an officer of Fort Mackinac (circa 1812). Only officers rode horses at the fort during that time period. Officers needed to be able to speedily travel from one end of the island to another - in case of trouble.

This is a Belgian draft horse, and probably the most recognizable and popular of all horses on Mackinac. They pull the carriages for Jack's Livery, Arrowhead, Mackinac Island Service Company, and Mackinac Island Taxi and Carriage Tours. Belgians can weigh over 2,000 lbs., are quick to mature, and long-lived. The Belgian is said to have the quietest disposition of any of the draft breeds. They are usually chestnut or sorrel in color, with a white mane and tail, four white stockings, and a blaze. This horse is "Toby."

A beautiful and powerful Percheron - a breed originally from Normandy, France. Percherons are predominately black, and some turn gray to white with age, while others remain black. The breed was often selected as a warhorse, and though powerfully built, they are also elegant and showy. Percherons pull the Grand Hotel Omnibuses and are used by the State Park, Arrowhead and Carriage Tours. They weigh close to 2,000 lbs., and this one's name is "John."

One of the Grand Hotel Hackneys, driven by Ben Mosley. Hackneys have been synonymous with the Grand Hotel for years and are featured on everything from ash trays to water glasses to carpeting. They are famous for their spectacularly high, ground-covering motion. Hackneys are originally from England.

A Welsh Cob, popular for driving, riding, and jumping. This one is dark bay in color and is 19 years old.

The lovely Haflinger Ponies. Haflingers are originally from Austria, where they are called "princes in front, peasants behind" because they have beautiful heads and muscular hindquarters. They are always chestnut in color, with flaxen to white manes and tails.

Doc Al and his Standardbred "Skip". Skip has retired from racing and is getting adjusted to the slower pace of the Mackinac Island streets. The breed originated in America and is the breed of choice as Amish buggy horses. They have a very fast trot, and make wonderful riding horses after their racing days are over.

This beauty is "Addy", a cross of Percheron and Standardbred. She is used for riding and driving, and is also a great trail horse. Addy is seven years old and is bright bay in color.

Beautiful "Grey", the only Thoroughbred on Mackinac Island, ridden by owner Trish Martin. Thoroughbreds originated in England, and no other breed has their combination of speed, endurance, and heart. They excel in racing, polo, foxhunting, jumping, eventing, and showing.

These are two island Arabians. The Arabian is said to be the first "true" breed and originated in the Middle East thousands of years ago. It is the most influential of all breeds, having been used to improve the blood lines of almost every other horse. Arabians can be ridden in Western tack as well as English, and are often called "high-strung" because they tend to have exceptionally quck movements. They are known for their great beauty, tremendous endurance, high tail carriage, and unflagging spirit.

A beautiful Tennessee Walking Horse. Originally bred in Tennessee, it would pull a plow in the morning and take its master for a drive in the afternoon and a saddle ride in the evening. They are naturally smooth-gaited and are known for nodding their head at the running walk. 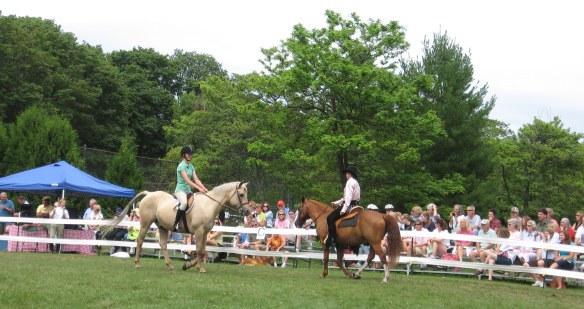 These are two American Quarter Horses, the most popular riding horses on Mackinac Island. Cindy's and Jack's Riding Stables are full of Quarter Horses, as is the 4-H Club barn, and there are also many privately owned Quarter Horses on the island. This is an American breed that is renowned for its talent to seemingly understand and "work" cattle. They are usually ridden Western, but work well under English saddle also. They are solid jumpers and trail horses.

This is "Puzzle", a cross between a Quarter Horse and an Appaloosa. Puzzle is 10 years old.

Two more Haflinger Ponies. The second pony in line in this photo is "Blaze", a 4-H Club pony who remained on the island through the winter last year. It was Blaze who pulled the sled we rode in when we were on the island during Winter Festival in February. 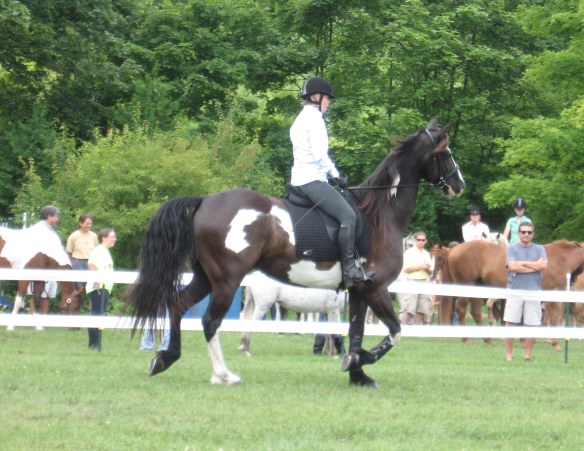 "Ringo", a beautiful Friesian/Paint cross, owned and ridden by Lisa Brock. Ringo is new to the island this summer and is being broken to drive. He is very tall, measuring almost 17 hands.

This Pinto Pony is "Topaz", ridden by Colton Fisher. Pintos came to America with the Spanish, but these patterns have existed among horses for thousands of years. Colton has been riding Topaz since he was old enough to sit up on the pony's back. 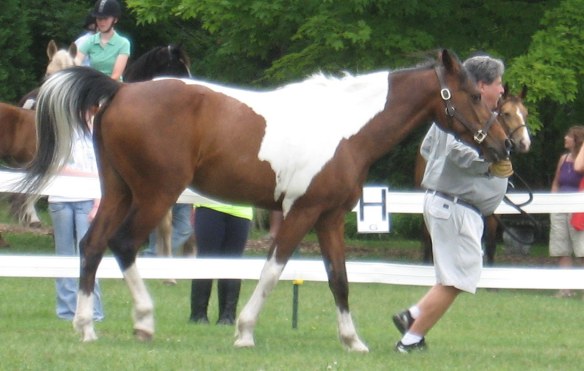 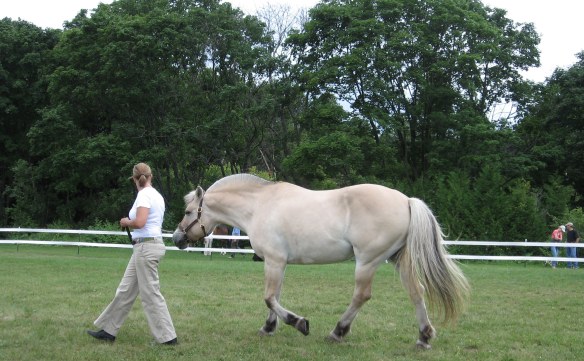 This is "Emma", the only Norwegian Fjord on Mackinac Island. I saw this horse being ridden last year behind the West Bluff and frankly, I stopped and stared. It was by far the most unusual horse I'd ever seen. The mane is coarse and sticks straight up, with a dark dorsal stripe that extends through the mane and tail. Emma's coat is plush and feels like velvet. A gorgeous, unusual horse.

Little "Gingersnap", the closest thing we have on Mackinac Island to a Pony of the Americas. Gingersnap is a cross between a Shetland Pony and an Appaloosa and is one of the 4-H Club ponies.

One of the island Friesians. They are always black, weigh between 1,200 and 1,400 lbs., and have long flowing manes and tails. 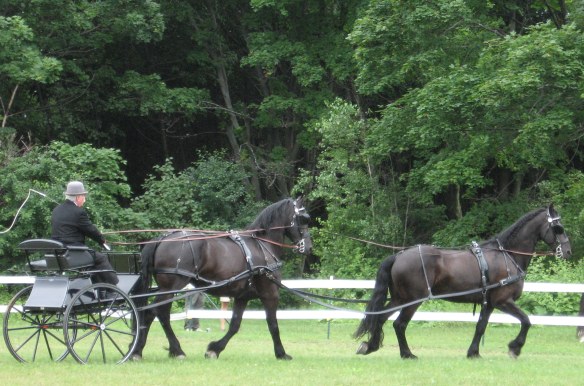 Friesians were orginally used as coach horses. These two are being driven in tandem.

As the finale of The Breed Show, Maryanke and Michelle once again performed a Musical Kur to "Exodus". This time I got to photograph the entire performance.

The Breed Show crowd was large and enthusiastic.

At the end of the show, the horses once again circled the arena while the crowd voted on their favorites.

A close-up of those long white eyelashes on the American Paint. 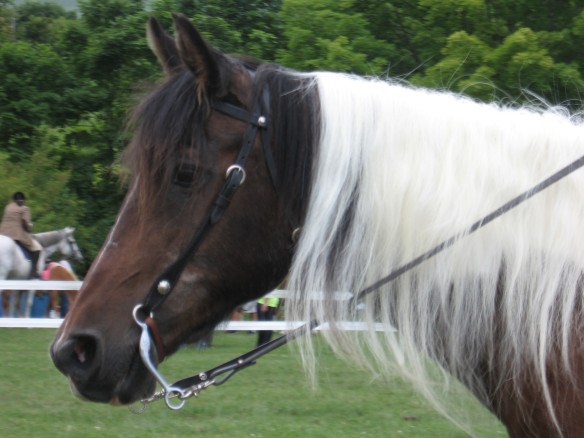 Up close and personal with "Topaz", the Pinto.

Wednesday morning we will make a major jump from horses to baseball, and on Thursday I’ll have photos from the Chicago to Mackinac Yacht Race, which began this past Saturday.  As I write these words, the boats are sailing in under the Mackinac Bridge.  See you Wednesday!